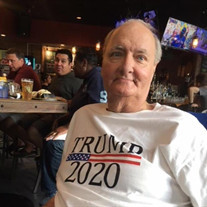 Dearest Uncle to Angela, Heather (Lenny) and Thomas, Great Uncle to Cassandra, Jordan and Alyssa. Great friend of Bertha Masterson, Pastor Dan and his wife Grace, Anthony and Tatiana Lane, their children and many others involved in his care whether it was someone from his church or medical professional he had a special bond with.

David was the youngest of three. His parents came here in 1950 from Poland. Grew up on the outskirts of Cleveland Ohio where he stayed until he moved to Orlando, Florida.

In his younger years, he was a model for a short time, loved to dance to anything Disco, loved to be the center of attention, laugh and live the best life he could. He spoiled his nieces and nephews as they grew up and had nothing but love in his big heart to give. He always made the best out of any situation handed to him and always did it with a smile or making a joke about it.

He had a special place in everyones heart who had the pleasure of knowing and will be missed by all those who knew him.