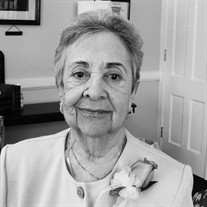 She was born on September 3, 1929 in New Bedford, MA. She was the daughter of the late Jose Joaguim Figueira from Camara de Lobos, Madeira, Portugal and the late Cecilia Santos Figueira from Estreito de Camara de Lobos, Madeira, Portugal. She was the widow of Manuel Travis from New Bedford, MA. She is survived by her daughter Melinda Marie Alexander, her son-in-law James J. Alexander, five grandchildren, Christopher Alexander, Cory Alexander, Jayme Losch, James J. Alexander II and Nicholas Alexander, and her four great-granddaughters, Faith Hubbard, Paige Alexander, Grace Losch and Madelyn Losch. She is also survived by her brother Edward Figueira and her sister Agnes Gonsalves.

She graduated from New Bedford High School and attended Kinyon-Campbell Business School for two years. She worked as a bookkeeper, bank teller and assistant branch manager at New Bedford Institution for Savings until her retirement.

She will be interred at Fountains Memorial Park, 5635 W Green Acres St, Homosassa, FL 34446 if you would like to send flowers.