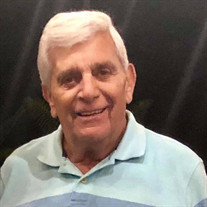 He was born on January 1, 1943 in Pennsylvania. He is survived by his children: Christine (Michael) Guthrie, Billy and David Ligato; his grandchildren: Kristin (Luke) Martineau, Kelly Ligato, Alaina Ligato, Kristin Cappuzzi, Corey and Nicole Guthrie and his great grandchildren: Colin, Nicholas, Colton, Weston, Kimber, and Lawson. He was preceded in death by his wife Catherine Ligato and his grandson Dustin Thompson.